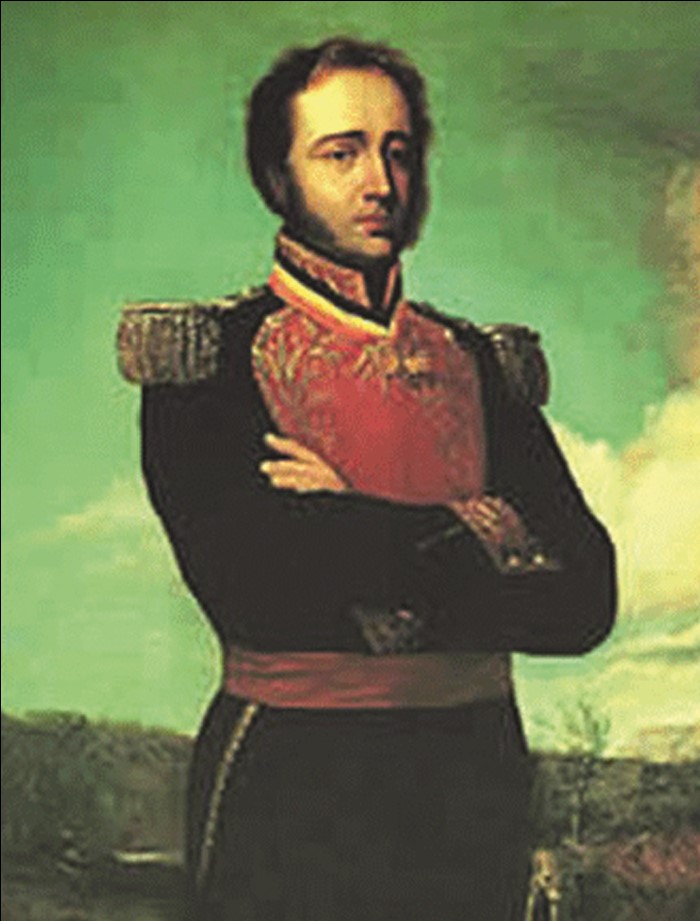 Charles Ponzi built the original Pyramid scheme; Michael Milken sold junk bonds; Nick Leeson was the rogue trader who broke the Barings Bank; and Bernie Madoff bilked investors with trading that did not exist. All of these men were un-ambitious amateurs when compared to Gregor McGregor, the financial fraudster to top all fraudsters.

One of the over 15,000 securities which Global Financial Data includes in the UK Stocks Database is the Poyais 3% Consolidated Bonds of 1822, which traded on the London Stock Exchange.

Gregor McGregor was a very selfish swindler who returned nothing to any of his investors. At least Bernie Madoff and Charles Ponzi took some of the money they received from investors and returned it to the initial investors in order to perpetuate their Ponzi scheme, but Gregor McGregor kept all the money for himself. He also granted himself the title of Sir, as well as, Grand Cazique (Prince) of Poyais indicating his extreme self-importance.

During the Napoleonic Wars ended, Spanish control over its South American colonies weakened and the colonists in those countries fought for their independence. Between 1809 (Ecuador) and 1825 (Uruguay), all of the South American countries declared and gained their independence from Portugal and Spain. However, countries need money, and the local tax base was limited. Most of the South American countries also had mines that produced gold and silver, so in the early 1820s, Argentina, Brazil, Chile, Colombia, Peru and other countries issued bonds that were backed by their new governments. Local mines issued stocks making promises of large profits to investors from the gold and silver they mined. This led to one of three bubbles on the London Stock Exchange in the early half of the 1800s; the Canal Bubble of the 1810s and the Railroad Bubble of the 1840s were the others. In the midst of this investment mania came Gregor McGregor who sold bonds and anything else he could muster in his mythical country of Poyais.

THE IMAGINATION OF SIR GREGOR MCGREGOR

Gregor McGregor had joined the Royal Navy in 1803 and was a Colonel in the Venezuelan War of Independence, fighting under Simon Bolivar who had fought in Florida in 1817.

In 1820, he returned to London and announced that had been named the Cacique (Prince) of the Principality of Poyais. The country was located on the Bay of Honduras and the land had been bestowed upon him by native chief King Frederic Augustus I of the Mosquito Shore and Nation. The country included over 12,500 square miles of untapped, rich lands which only lacked settlers to develop.

To help promote his cause, he published a book, Sketch of the Mosquito Shore, including the Territory of Poyais, supposedly written by Captain Thomas Strangeways. The book said English settlers had founded the capital of St. Joseph in the 1730s, had untapped gold and silver mines, fertile soil, and other ample resources which settlers could profit from. The country had a civil service, a bank, an army, a democratic government, and natives eager to work for their British masters. The book can be downloaded for free from Google Books and you can read for yourself the wonders of this non-existent country. Unfortunately, the most fertile thing about Poyais was Gregor McGregor’s imagination.

In reality, King Frederic Augustus had signed the document granting the land to Gregor McGregor in April 1820 after being plied with whiskey and run. The land only had four run-down buildings in it, and was surrounded by uninhabitable jungle with no fertile lands, gold or silver mines and the other assets describe by McGregor in his book. But to a fraudster, facts are irrelevant. It was his fiction that fed his cause.

THE ASSETS OF POYAIS?

Once people began to read about the Territory of Poyais and all of its riches, investors had the misfortune to meet with the Cacique of Poyais in London’s inner circles of the rich and famous. This was the time Gregor McGregor could profit from his non-existent country.

For the rich he offered 2000 bonds at £100 each on October 23, 1822, which resulted in £200,000 in sales. The bonds were offered at 80 and paid 3% interest. These bonds were quoted in The Times between November 9, 1822 and December 17, 1822. For the poor, he offered land for sale at the rate of 3 shillings, 3 pence per acre (later 4 shillings), which was about a day’s wages in 1822, therefore it appeared to be a very attractive investment opportunity. He sold places in his military, the right to be shoemaker to the Princess, a jeweler, teacher, clerk or other craftsman in his non-existent government and country. In fact, he even issued his own currency which the settlers could use once they arrived in Gregor McGregor’s El Dorado.

The Poyaisian Legation to Britain opened offices in London, and land offices were opened in Glasgow, Stirling and Edinburgh to sell land to his fellow Scots. Gregor McGregor had a group of people who promoted and sold all the land and other Poyaisian goods, sharing the profits with McGregor. By 1823, Gregor McGregor was a multi-millionaire in today’s terms.

One of the over 15,000 securities which Global Financial Data includes in the UK Stocks Database is the Poyais 3% Consolidated Bonds of 1822, which traded on the London Stock Exchange.

THE SETTLEMENT OF POYAIS

As amazing as it may seem, the Legation of Poyais chartered two boats to take settlers to Poyais. Why they would take this risk, knowing that the settlers would discover the truth about Poyais once they arrived, staggers the imagination, but perhaps the fraudster had started to believe his own fraud. On September 10, 1822, the Honduras Packet departed from London with 70 settlers including doctors, lawyers and a banker. On January 22, 1823, the Kennersley Castle left Leith Harbour in Scotland with almost 200 settlers.

Of course, when they arrived, the settlers, some of whom had risked their life savings, found an uninhabitable jungle that had more tropical diseases than silver and gold. Of the original 240 settlers who reached Poyais, only 60 survived and 50 eventually returned to London, the others remaining in British Honduras (Belize).

Gregor McGregor, however, fled to France.

The Mexican Eagle, an official ship from British Honduras happened upon the Poyaisian settlers in April 1823 and brought King George Frederic to the settlers to tell them he had revoked the land grant because McGregor had assumed sovereignty. 50 settlers sailed back to London on the Ocean on August 1, 1823 and arrived in London on October 12, 1823. The next day, the story of the ill-fated investors hit the newspapers of London.

Amazingly, many of the settlers defended Gregor McGregor. One of the settlers, James Hastie, who lost two children to tropical diseases, published a book Narrative of a Voyage in the Ship Kennersley Castle from Leith Roads to Poyais, in which he blamed his advisers and publicists for the false information about Poyais. 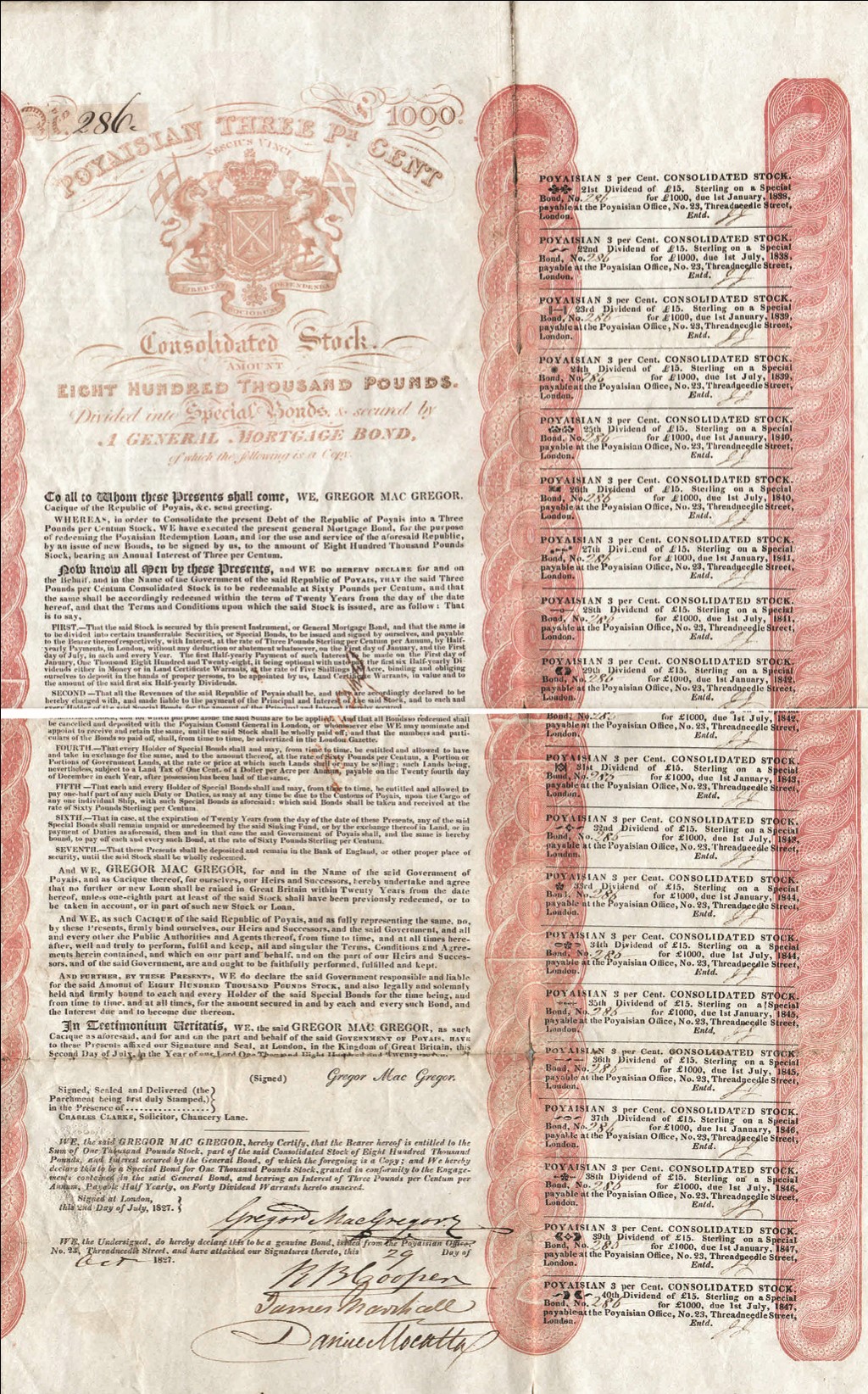 Once in France, Gregor McGregor continued his fraud. He wrote a constitution for the Republic (no longer a Principality) of Poyais and tried to sell land to French settlers. In 1825, he tried to issue new bonds, and shares in a Poyaisian company.

When potential settlers began applying to the French authorities to sail to a country that didn’t exist, the French began investigating. Gregor McGregor was arrested on December 7, 1825 and spent two months in prison on remand. There were two trials, one in April 1826 and another in July 1826 in which McGregor was acquitted, but one of his co-conspirators, Lehuby was sentenced to 13 months in prison.

Gregor McGregor returned to London, and still claiming to be the Cacique of the Republic of Poyais opened an office at 23 Threadneedle Street (near the Bank of England). He tried to issue new Poyais bonds in 1827 through Thomas Jenkins and Company as brokers, but with little success. In 1828, he tried to sell land in Poyais at 5 shillings an acre (about $1). In 1831, McGregor, now President of the Poyaisian Republic, issued Poyaisian New Three per cent Consolidated Stock bonds. He tried to sell land certificates in Poyais in 1834 and in 1837 and wrote a new Constitution for Poyais in 1836.

In 1839, Gregor McGregor moved to Venezuela where he received a pension as a general who had fought in the Venezuelan War of Independence. He died on December 4, 1845.

Several books have been written on Gregor McGregor, the best of which is David Sinclair’s The Land That Never Was: Sir Gregor McGregor and the Most Audacious Fraud in History. Collectors occasionally can run across bonds, currency or land certificates issued and signed by Gregor McGregor.

The history of Poyais and Gregor McGregor should forever remain a cautionary tale to investors. Don’t believe every “hot” opportunity that comes your way because history indicates that we will encounter another clever swindler. May investors beware so that they do not fall prey of the next Cacique.