Greece: Kicking the Can

It has been two years since Greece’s first credit downgrade during this credit debacle, since this is Greece’s
third time in the hot seat since 1824. Not only have conditions not improved, the credit crisis continues to
worsen and additional Euro countries are being negatively impacted by the crises.

The past 2 years have been very bumpy for Greece and many surrounding countries. The Greeks have endured credit downgrades, rioting in the streets, political unrest, increased unemployment, and economic stagnation as a result of massive debt and austerity measures that have thus been introduced by the Parliament. Since Greece has been the scapegoat for the credit problems in Europe the leaders have held countless meetings with other EU members in an attempt to mitigate the economic impact of Greece’s credit problems. Greece is running out of time to resolve its debt issues.

BORROWING FROM PETER TO PAY PAVLOS

Moody’s rating agency will remain negative until Greece is able to provide collateral in return for aid from foreign
governments. The agency also said such deals showed a lack of support from other Eurozone countries to help out Greece. This has put more pressure on Germany and France to take stronger steps to support the European Union. Austria, the Netherlands and Slovakia have also asked for collateral on their loans to Greece. Moody’s warned that agreements for foreign collateral could delay the next tranche of aid for Greece and ironically, actually helped cause Greece to default on its payment to previous creditors. To coin another phrase, Greece is borrowing from Peter to pay Pavlos.

Yields on Greek debt have spiked sharply in recent weeks and other members of the PIIGS (Portugal, Ireland, Italy, Greece and Spain) are beginning to see their cost of borrowing rise while the relatively safe German Bund yields are falling sharply. On the previous page is a graph that shows the yields for Government Bonds of Germany, Greece, Portugal, Ireland, Spain and Italy over that last 5 years. In 2008 there is a clear move away from the German Bund by these riskier countries as the fear of default rose and they experienced problems balancing their budgets. 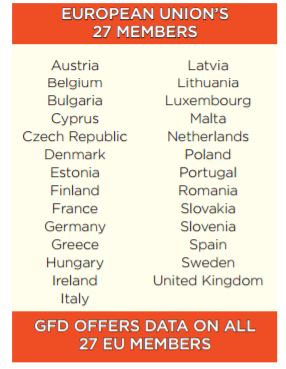 In July, leaders of the Eurozone countries agreed on a new bailout package for Greece worth 109bn euros ($155bn). The package was comprised of collateral from Euro Countries and private lenders, including banks, who pledged support by giving Greece easier repayment terms. The deal, struck at an emergency summit of the EU’s 27 members, also involves support from the International Monetary Fund (IMF). The ratings agencies have yet to give their verdicts on the deal, but if they do deem Greece in default, this will make Greece the first EU country to have defaulted on its debt. Below is a table that shows the yield of the 10-Year government bonds for Germany, Greece, Ireland and Portugal. This also
includes the spreads of the 10-year yields of Greece, Ireland and Portugal, Spain and Italy relative to the German Bund. The spread in 2000 and in 2007 was about half a per cent or less whereas in 2011 the spreads are over 8% for the economically weaker countries of Greece, Ireland and Portugal.

The Greeks are in a tough spot. Unfortunately they are running out of options and running out of time. These issues have been leading headlines for nearly 3 years. Greek debt remains a global concern. A firm plan of action must be created. Either Greece pays off its creditors or it defaults on its debts and restructures its government spending. Eventually a recovery will result, however not without sacrifice, commitment and change. None the less, Greece must stop being a burden on the European Union and the Union must stop allowing Greece to misuse the funds it is being given. This is leading many economists as well as the market to conclude that a Greek default is inevitable.