The saga of the European Default continues with Greece playing the starring role. If this were a play, the audience would be shouting at the director “will this show ever end?” All kidding aside, the Greek debacle is no small affair and has been making consistent headlines for more than two years. In fact, Greece has one of the worst track records of any country in Europe when it comes to default.

Between 1826 and 1964, Greece was in default for 90 of those 138 years, so it should come as no surprise that Greece will most likely become the first Euro member to default. In the good old days, countries defaulted first and came to an agreement with creditors later. Unfortunately, this is not the case as the European Union acts like a nurse maid trying to protect all its countries or groups from being hurt by a default. So, what do they do? They provide a bailout for a protected class and spread the cost on to everyone else.

Greece is a serial defaulter, and the European Union kept forgiving Greece’s transgressions. In economics, this is called moral hazard. In other words, a moral hazard exists when a group can act however it wants because they will not have to take responsibility for their actions.

A PATTERN OF SERIAL DEFAULTS?

The previous paper, “Greek Loans and Greek Defaults: Déjà Vu All Over Again” detailed Greece’s first default of 1827 when it managed to default even before gaining independence. The Three Great Powers (Great Britain, France and Russia) guaranteed a loan of £2,100,000 in 1833 to help Greece after it gained independence. Since Greece was in default on previous loans, the country couldn’t issue any new loans, and as you might guess, Greece defaulted on this loan sticking Great Britain, France and Russia to foot the bill.

Greece remained in default on its bonds until 1878. As part of one restructuring in 1846, the Greeks detached the coupons due between 1827 and 1846 from the original bonds and they traded separately. By the time the Greeks finally restructured their defaulted debt in October 1878, the 1824 bonds were £275 behind in principal (£100) and interest. Bondholders received £31.6 for every £100 nominal of the old bonds, of which £275 was due (an 88.5% write down).

Having settled their outstanding loans in 1878, Greece was able to issue a new 5% loan to help build the Piraeus-Larissa Railway and issue a monopoly loan. Greece pledged revenues from tobacco taxes, revenues from national lands and plantations and some customs receipts. Despite this, Greece still defaulted in 1893.

After war with Turkey in 1897, a Special Commission was appointed by the Six Great Powers: Great Britain, France, Germany, Austria-Hungary, Italy and Russia, who examined the finances of Greece and put together the Settlement of 1898. Greece threw everything into the pot, monopolies on salt, petroleum, matches, playing cards, cigarette paper and Naxos Emery; stamp and tobacco dues; and Piraeus customs (import) duties. Interest payments were lowered to 43% of the Monopoly Loan and 32% of other loans and a sinking fund of 1% per annum of original interest was required to 1902 and 2% thereafter. 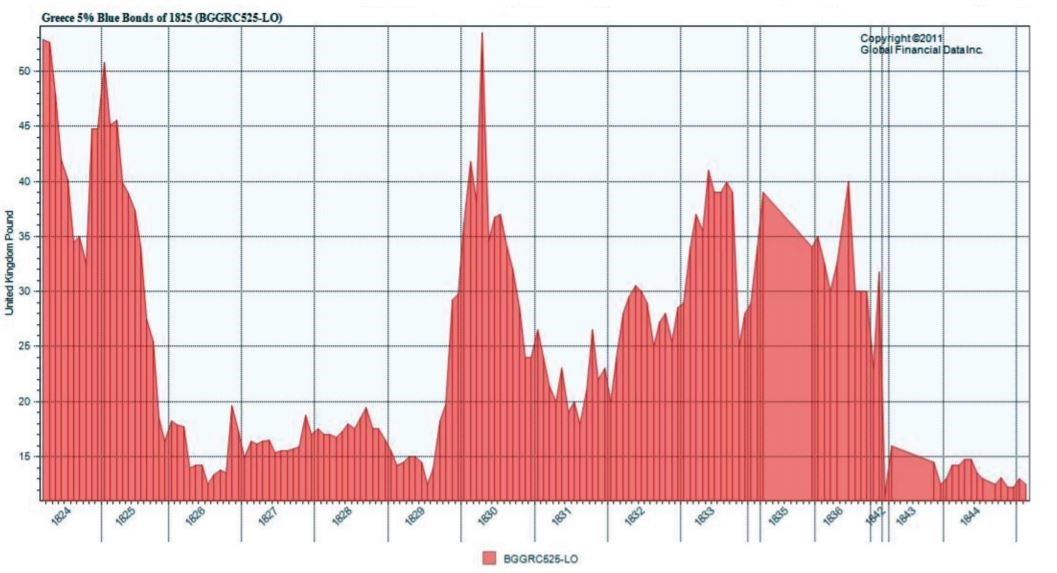 Greece Gains Its Independence, but Investors Lose Their Money

To make sure Greece paid, the country was put under an International Financial Commission that had the responsibility of collecting the revenues to pay off the debt. After the Commission paid off the portion of the debts due for that year, the remainder was returned to the Greek Government.

Not having the Greeks run Greece worked out pretty well and Greece managed to stay out of default until 1922 until Greece began paying reduced interest on some of its loans from the 1800s. Following a banking crisis in 1931, Greece plunged back into default and Greece reduced the interest payments on all of its debt in July 1932 to 25% of interest due and suspended all principal payments. When Greece was occupied by Germany and Italy in April 1941, they suspended all interest payments. The hyperinflation of 1941-1944 wiped out the value of all internal debt and no principal or debt payments were made until 1963.

So how has Greece managed to avoid default since 1964? Simple, they joined the European Union in 1981. Joining the European Union meant that Greece got a constant influx of money from the rest of Europe to promote development, reducing the need to rely on internal taxes to fund spending and to default when spending exceeded revenues.

Greece joined the Euro in 2001, two years later than anyone else. In order to join, each country had to get its government deficit below 3% of GDP Greece Gains Its Independence, but Investors Lose Their Money globalfinancialdata.com and either have government debt below 60% of GDP or have its debt shrinking as a share of GDP. After Greece was admitted to the Euro, they admitted they had cooked the books to get in. Greece suffered no Consequences as the leaders of the EU turned a blind eye to this fraudulent behavior. Countries were supposed to keep their government deficit under 3% of GDP and when Portugal exceeded this limit, there were threats of imposing financial penalties on Portugal if they didn’t change. But when France and Germany exceeded the 3% limit, they decided to forgo any financial punishment for any country, paving the way for future Greek excesses. Still, no consequences.

Banks were told they could use the debt of any country as default free collateral to meet Basel credit requirements, and with Greek bonds paying higher yields than German bonds, the flood gates were opened. No punishment, lots of rewards. Greece lied about its finances again during the Financial Crisis of 2008, and the consequence? Germany led a concerted effort (now there are 16 countries helping out Greece) to provide a credit transfusion to Greece since they are unable to go to the financial markets.

LET GREECE DEFAULT AND GET IT OVER WITH

Greece is a serial defaulter. Like an outlaw that can’t be reformed, Greece kept breaking the rules. When default became inevitable, Germany and the rest of the EU sent Greece hundreds of billions of dollars since Greece could get nothing from the open market. So what incentive does Greece have to change its behavior?

The problem is not just Greece. It is the entire EU political system. The Euro was originally established to create a common market, using a single currency and reducing the boundaries of trade, labor and capital. However, the original reasoning behind the establishment of the Euro has not been maintained. Rather, the political side of the Euro has now taken over and it has now become a massive redistribution machine. 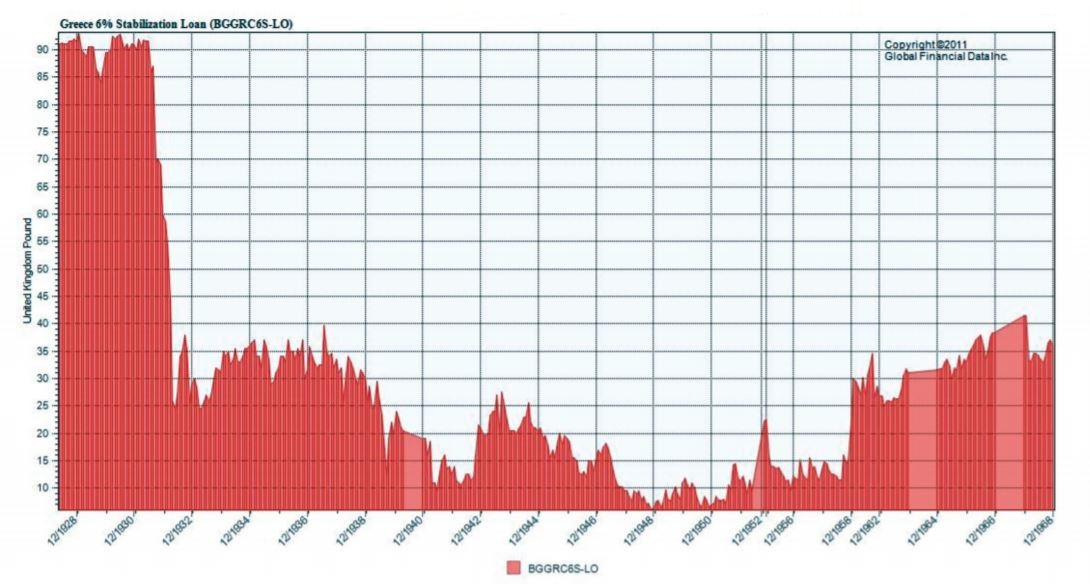 Greece Stays in Default through Most of the 20th Century

Rule number one of economics is politics always trumps economics. Creating a single market in Europe, just as the one in the United States, was a good idea provided policies could have been maintained. But when Germany and France allowed Greece to operate outside of proper practices and forgave its indiscretions, this established a pattern of disciplinary negligence. Also, by allowing their banks to buy Greek debt as if it were the same quality as German debt, they only helped to create the conditions they now regret.

Most German taxpayers say, let Greece default. Once the current financial crisis is over with, Greece will start breaking the rules again using the threat of default to get hundreds of billions from the rest of Europe. Greece is like a member of the Mafia who goes over to Germany and says, “Nice little currency you got there, give me a hundred billion or I’ll smash it.” Avoiding default only drags the crisis out and raises the eventual cost to Europe. It’s time to let Greece default and move on.