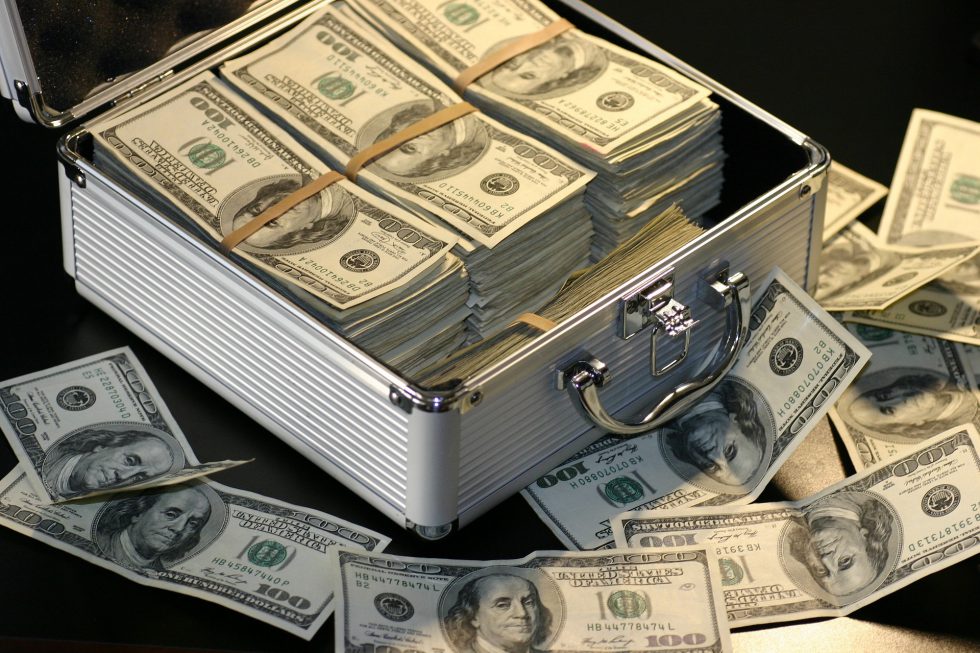 Government Bond Yields and Returns in the 2020s

The 2020s have begun.  During the 2010s, the fixed-income market has done things no one would have predicted when the 2010s began ten years ago.  The most important feature of the past decade has been the steady decline in government bond yields, falling to negative nominal yields in most of Europe and negative real yields in the United States and Canada.

I believe that interest rates cannot continue to decline.  Why accept a negative return when you can always hold cash with a zero return?  There are transaction costs of buying and selling bonds.  Although these costs can be easily factored into a long-term bond, this is more difficult with a short-term bond.  Will the 38-year bull market in bonds driven by declining yields come to an end? Is a new multi-decade pattern of rising bond yields replacing the declining yields of the past few decades?  There are over $10 trillion in outstanding government bonds with negative yields in the world.  Many of these bonds are owned by governments so the yield is almost irrelevant.  Will bond yields still be negative ten years from now?  Will interest rates decline or rise during the decade to come? 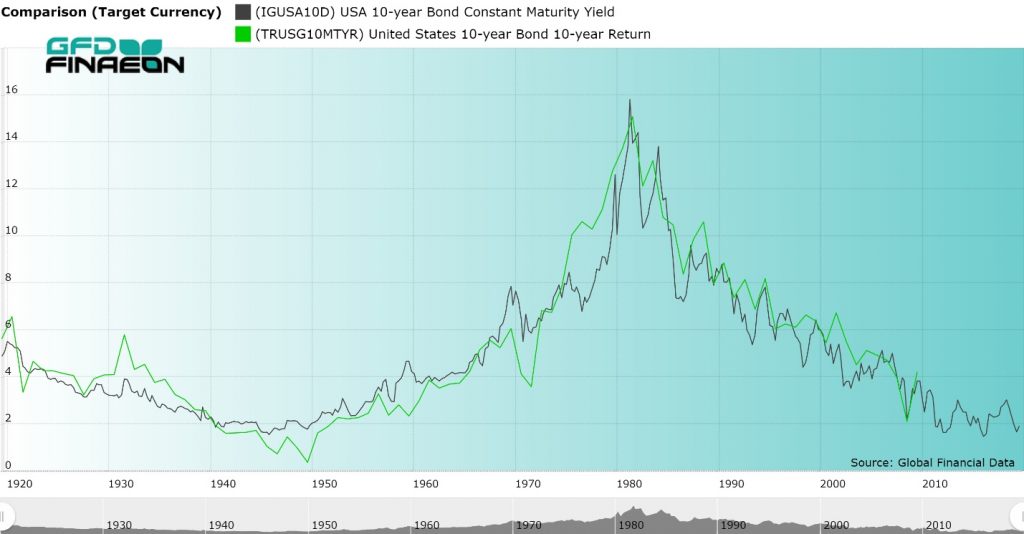 Fixed-income investors are concerned about two factors, the capital gain or loss they receive when there is a change in the bond yield and the interest payments they receive each six months from the government.  GFD’s 10-year Total Return Government Bond index takes both of these factors into consideration in calculating the total return to holders of government bonds.  During the period of rising interest rates between 1945 and 1981, bondholders received higher interest payments over time, but lost money as higher interest rates drove the price of bonds down.  The opposite effect has occurred since 1981.

What is interesting is that the capital gain/loss that occurs because of rising or falling bond yields offsets the interest bondholders receive to even out the return to investors. The assumption is that as the bondholder receives interest payments over time, this money is reinvested in government bonds at the current yield in the market. In theory, the bondholder could completely reinvest his principal and interest in a new bond each year. Bondholders can also invest in mutual funds that effectively do this for them.  The interesting thing is that over the past 75 years, the capital gain/loss that has been generated by the rising and falling bond yields has offset the rising and falling coupons that have occurred over time. 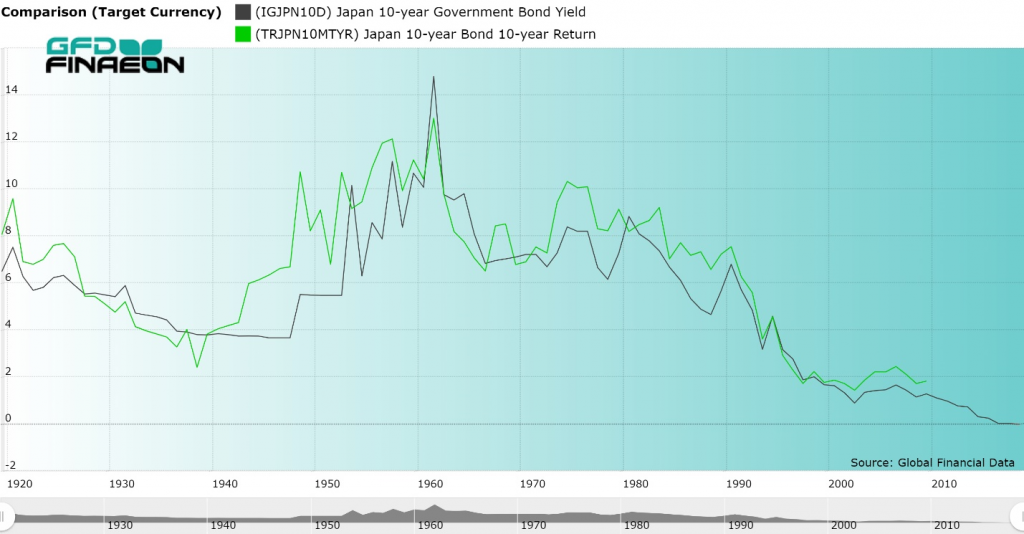 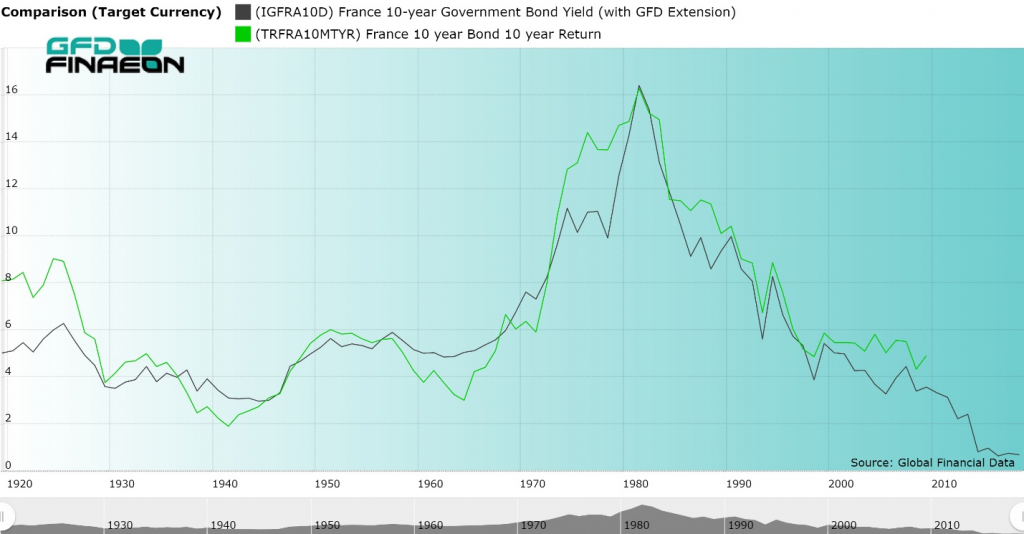 The Decade to Come

Examination of global bond yields in Figure 4 compares bond yields over the past 20 years in the United States, Germany, the United Kingdom, Japan, Canada, Australia and Switzerland.  Interest rates in Germany, Japan and Switzerland have turned negative, and after adjusting for inflation, you would find that real yields in the remaining countries are negative.

If you look at the yield and return graphs for the United States, Japan and France in Figures 1, 2 and 3, you will see that the returns are not provided after 2009 because we don’t know what the behavior of bonds in the 2020s will be and thus cannot calculate the total return to bondholders between 2012 and 2022, for example, because this number will not be known until 2022. 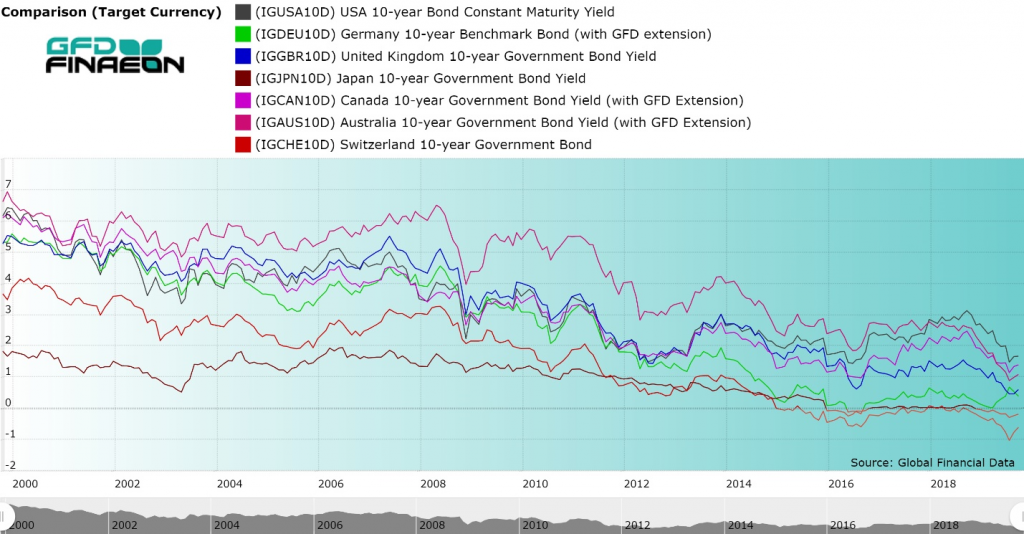 The inevitable logic that would come from this analysis so far is that if the yield on government bonds declined in the 2010s as they did in the 1980s, 1990s and 2000s, then a continued decline in government bond yields during the next decade is the most logical outcome.  If bond yields were to rise, this would impose capital losses on bondholders, driving the total return to negative levels even below the yields that persisted in the 2010s.

To illustrate this fact, I have calculated what the total return to US government bondholders would be if bond yields rose by 0.125% in each of the next ten years and if they fell by 0.125% annually starting at a yield of 2% at the end of 2019.  With these assumptions, I can calculate both the return from interest payments and the impact on the price of government bonds as the money was reinvested. I provide the results in Figure 5.  In reality, bond yields will not rise or fall each year at a constant rate, but will fluctuate. The overall results will be the same regardless. 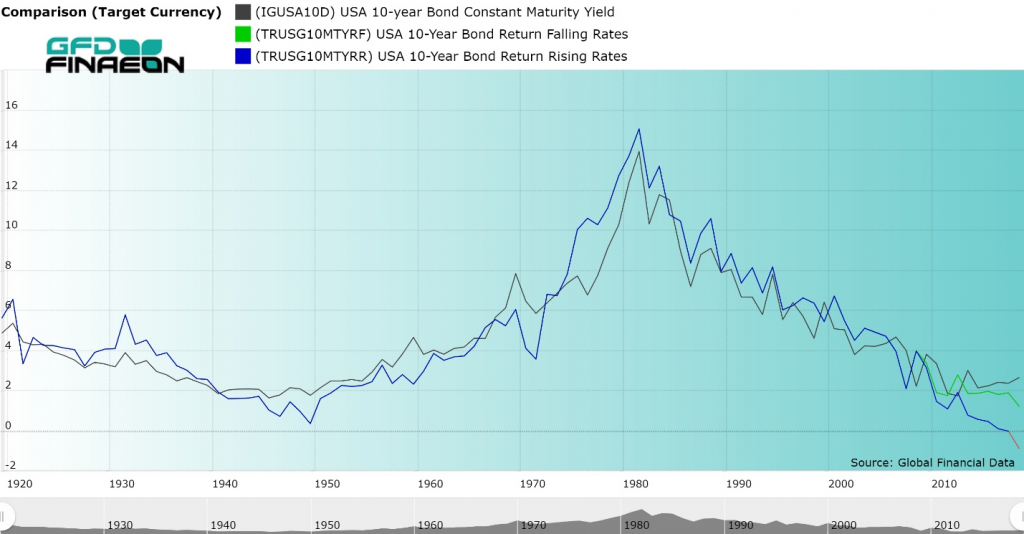 Some would say that a return to rising bond yields is inevitable, but this isn’t necessarily true.  Bond yields fell throughout the 1800s.  Yields fell from 5.345% in 1803 to 2.43% in 1897.  There is no reason why bond yields might not fall for decades if the Federal Reserve can keep inflation under control. Population growth and economic growth may remain stagnant and constrain any increase in inflation or interest rates in the future. Data on these indicators are available through the GFDatabase and GFD Indices. All of the 10-year bond yields extend further back than is displayed in Figure 4. Fixed-income investors may be condemned to lose money during the next decade.  The only question is how much?