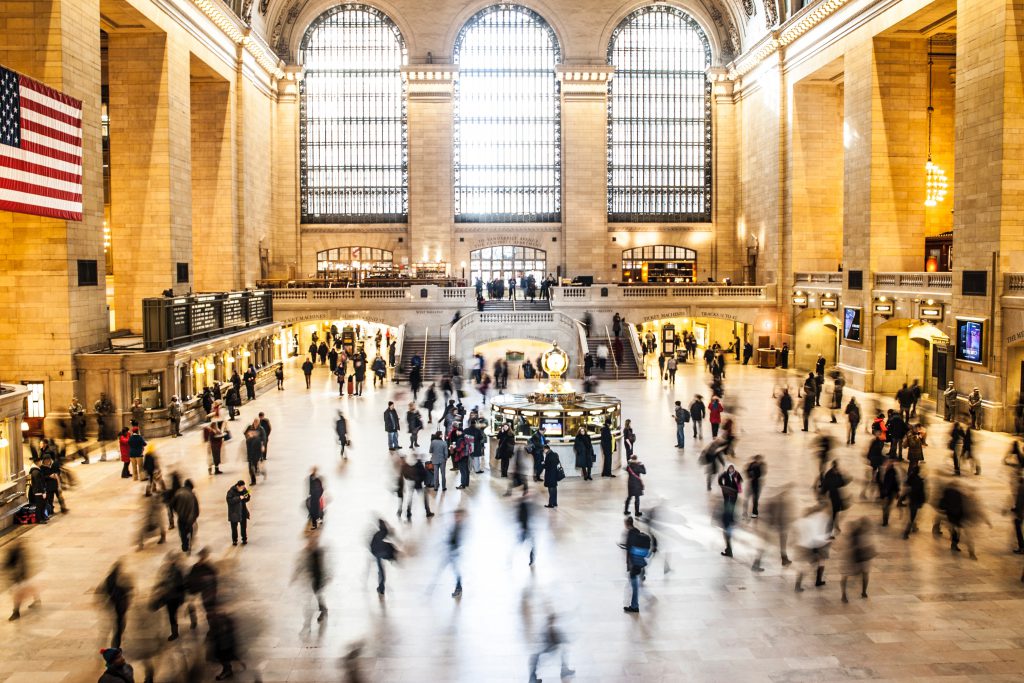 The equity-risk premium (ERP) is one of the most important variables in finance. It tells investors how much a risky investment such as stocks returns relative to a risk-free investment such as government bonds.  Any history of the equity premium shows that its value is not constant.  It varies dramatically from one year to the next.  In theory, riskier stocks should provide a higher return than risk-free government bonds, but unfortunately, this has not always been true. 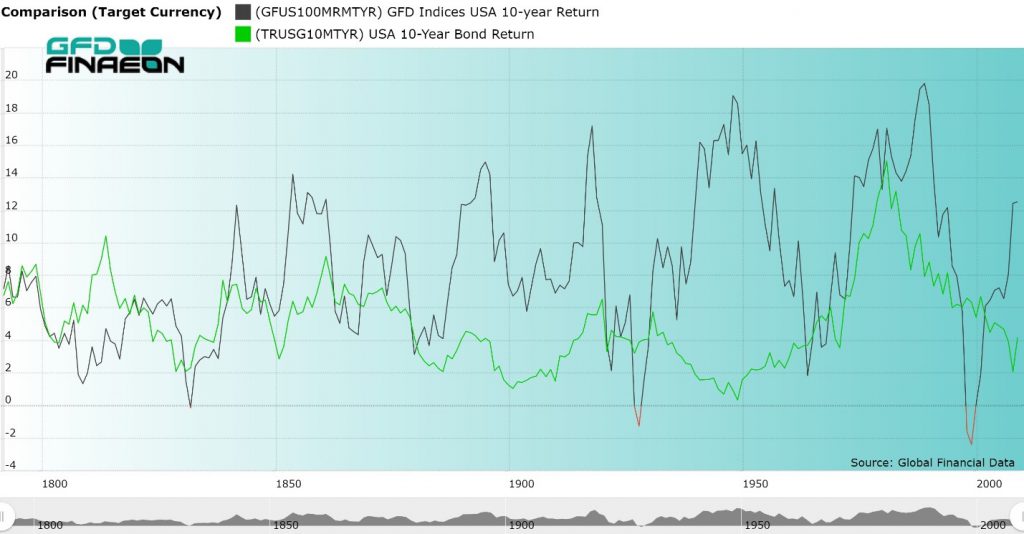 The 10-year return to stocks and bonds in the United States is illustrated in Figure 1.  The black line represents the return to stocks, and the green line the return to bonds. The data are looking forward, so the final value for 2008 measures the returns to stocks and bonds from 2008 until 2018.  This chart tells you that the 10-year return that someone who invested in stocks in 2008 would have been 12.49% between 2008 and 2018.  Someone who invested in bonds would have received a 2.13% annual return and the equity premium would have been 10.15%.

As Figure 2 shows, there is a strong correlation between the current yield on government bonds and the return over the next 10 years.  The black line shows the yield in 2008 and the green line shows the return to bonds between 2008 and 2018.  As bond yields declined between 1981 and 2019, fixed-income investors received capital gains that largely offset the decline in bond yields.  This analysis implies that bond yields should continue to fall during the 2020s because interest rates declined in the 2010s.  Although yields fluctuate up and down from year to year, bond yields can trend up or down for decades. Bond yields generally declined from 1920 until 1945, rose until 1981 and have declined since then. 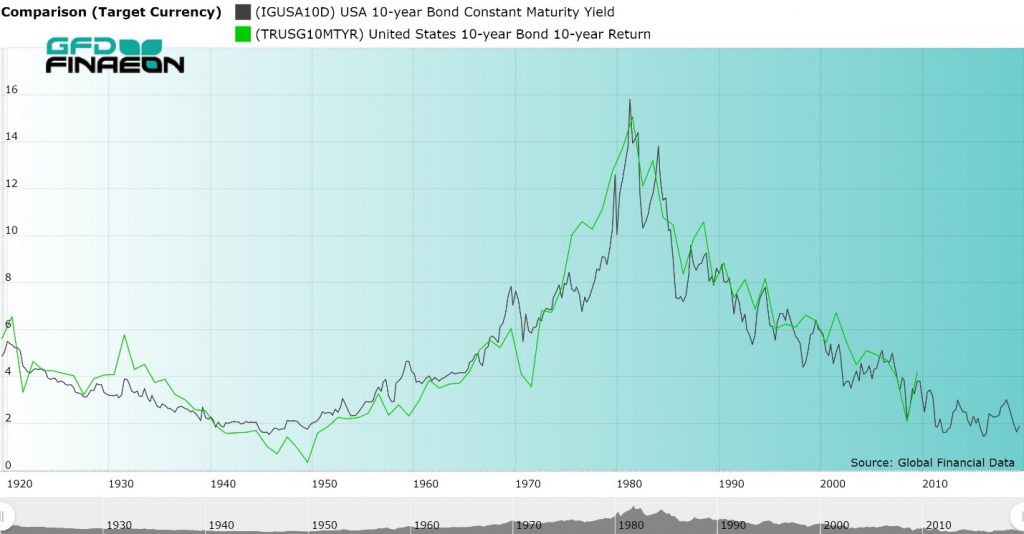 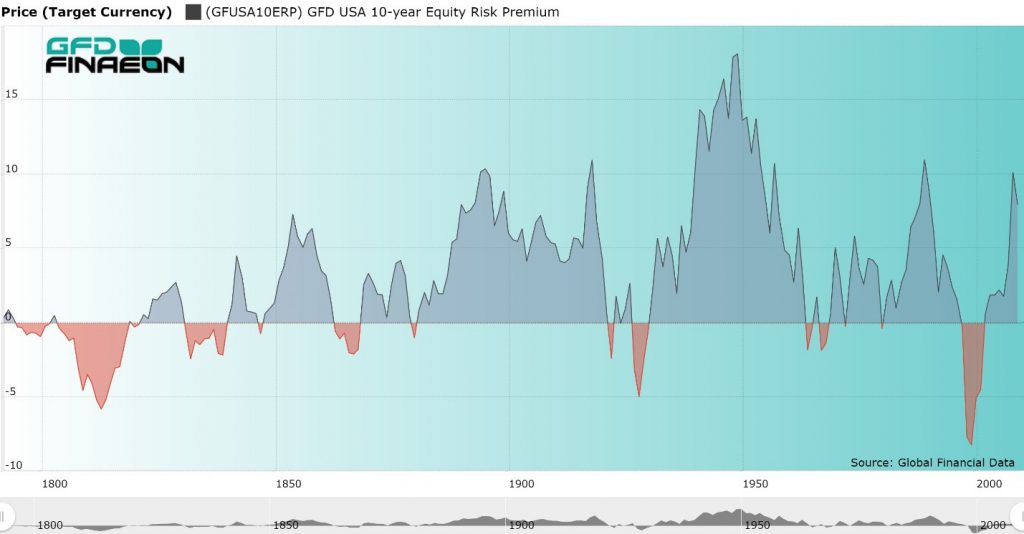 The 10-year average equity risk premium is illustrated in Figure 3.  Volatility in the equity premium is driven more by changes in the return to stocks than changes in the return to bonds.  In 2018, the equity premium between 2008 and 2018 was 10.15%.  This is up dramatically from the low of -8.22% in 1999/2009 and ended a dramatic decline from 8.87% in 1990/2000.  The equity premium has passed through 10-year cycles during the twenty-first century because the stock market has passed through 10-year cycles.

Although stocks are riskier than bonds, there are 17 years during the past 100 years when the 10-year equity premium was negative, meaning that government bonds provided a higher return than stocks during those ten years.  The equity risk premium has been negative in 59 of the past 218 years.  In other words, bonds outperformed stocks 27% of the time in the past 218 years.  The worst return came in 1999/2009 when bonds beat stocks by 8.22% per annum.  The highest equity premium was in 1949/1959 when stocks beat bonds by 18.17%.

Currently, the return to stocks is rising and the return to government bonds is falling.  Barring a sudden reversal in the stock market, this means that the equity risk premium will probably continue to rise for the next few years.  At some point, the ERP will reverse, but when and how remains to be seen.

The Equity Premium in London 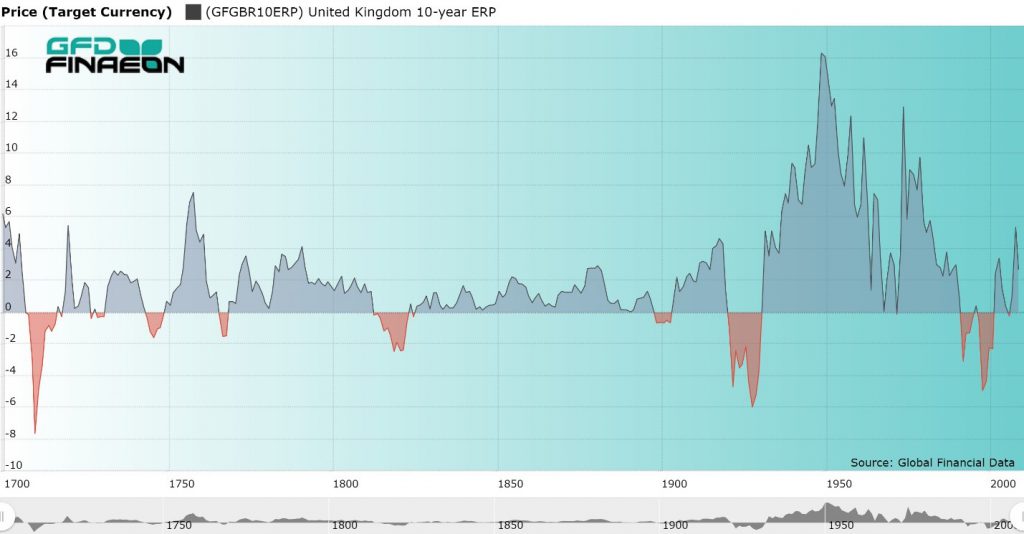 Where do we go from here?

Unfortunately, since the data look at returns over 10-year periods, we are 10 years behind on our calculations.  It is difficult to determine whether stocks will beat bonds or vice versa between 2019 and 2029 when we don’t even have the returns for 2009 to 2019 available yet.  We do know that the equity premium is increasing in both the United States and the United Kingdom.  We also know that stocks beat bonds 80% of the time, and bonds beat stocks 20% of the time.

Returns to bonds are likely to be low over the next decade because yields on 10-year bonds are less than 2% in the United States and Canada, less than 1% in the UK, and negative in most of continental Europe.  The 10-year return to government bonds is not volatile. Therefore, the equity premium will be almost solely dependent upon the return to stocks.  Currently, the equity risk premium is increasing in both the United States and the United Kingdom, and there is no reason to believe that the ERP will reverse soon; however, history has shown that when the ERP does reverse, it continues on that path for several years to go.  When this will occur, we do not know.

Historically, the equity risk premium has averaged around 3% for the United States and the United Kingdom.  With bonds yielding 2% in the US and 1% in the UK, it would be difficult to expect equity returns to be greater than 5% over the coming ten years.  Investors have gotten used to high returns over the past 80 years.  Perhaps they will have to adjust to receiving lower returns in the 80 years left in this century.