The United States stock market has broken to new highs in January 2020, continuing a bull market that began in March 2009.  The S&P 500 has risen 382% since March 2009 and is approaching the record bull market of 1974-1987 in which the S&P 500 rose 442%.  This would be only the fourth time that an American bull market rose by more than 400% if this bull market continues. As Figure 1 shows, US stock market Capitalization is close to the same levels as in 1999 when the Internet Bubble burst.  By our estimate, when the S&P 500 hits 3650, the stock market’s capitalization will be twice GDP. 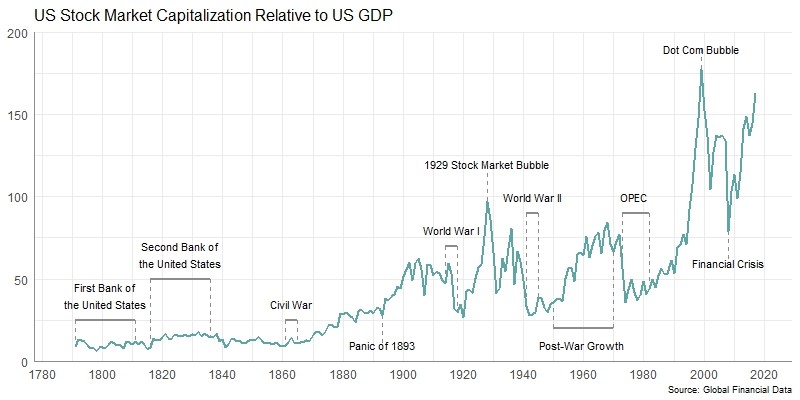 But many people are wondering whether the high price of the stock market is justified by the underlying fundamentals.  The economy has been growing for over 10 years, unemployment is at a record low, operating earnings on the S&P 500 are over $1.2 trillion.  S&P 1500 companies have paid over $500 billion in dividends and spent over $800 billion on buybacks. As can be seen in Figure 2, GFD’s index of Dividends Paid as a Share of GDP has hit its highest level since the 1929 market crash.

In addition to dividends paid to shareholders, corporate buybacks are at record levels as well.  While dividend payments reduce the price of stocks, corporate buybacks shrink the supply of outstanding stock and push stock prices higher.  In 2018, S&P 500 corporations spent $806 billion on buybacks and $456 billion on dividends.  This was equal to 3.86% and 2.39% of GDP respectively.  The dividend yield in 2018 was 2.17% and the buyback yield was 3.84% creating a gross return to investors of 6.01%.   This puts dividends and buybacks at a record level.

We have extended our index of dividends paid as a percentage of GDP back to 1792.  We did this by multiplying the US stock market capitalization by the dividend yield and then taking 70% of the total to adjust for companies not paying dividends.  This adjustment allowed the data to line up with the actual numbers from the 1990s.  The results are provided in Figure 2. 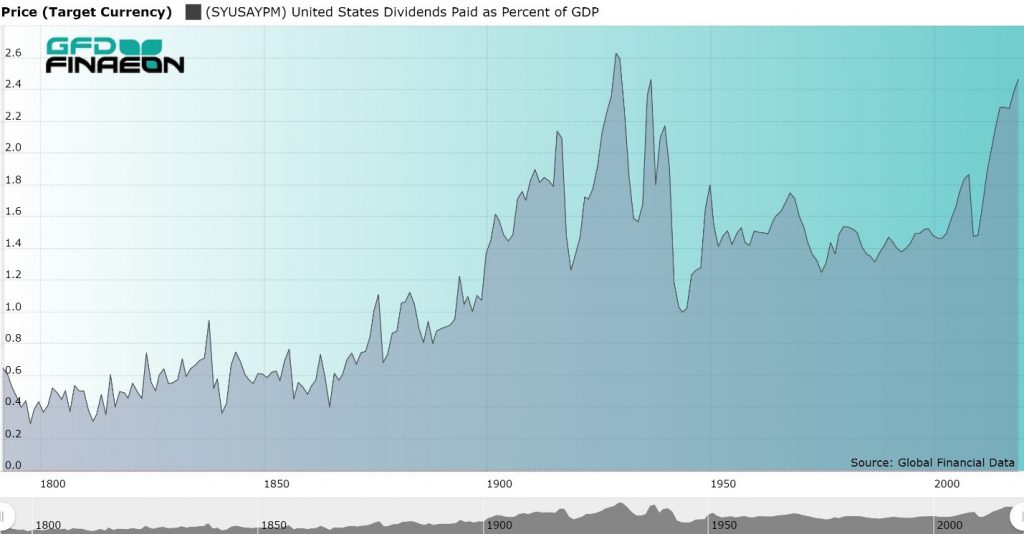 There was little change in the amount of dividends paid out from 1792 until the end of the civil war.  From the 1870s until the 1920s, there was a steady increase in the amount paid in dividends as railroads and industrial companies spread throughout the economy.  The index hit peaks in 1916, right before the United States entered World War I, in 1929 when the bull market of the 1920s hit its peak, and in 1937.  The index remained fairly constant from 1950 until 2000, but has been rising since then, hitting new peaks in 2019.