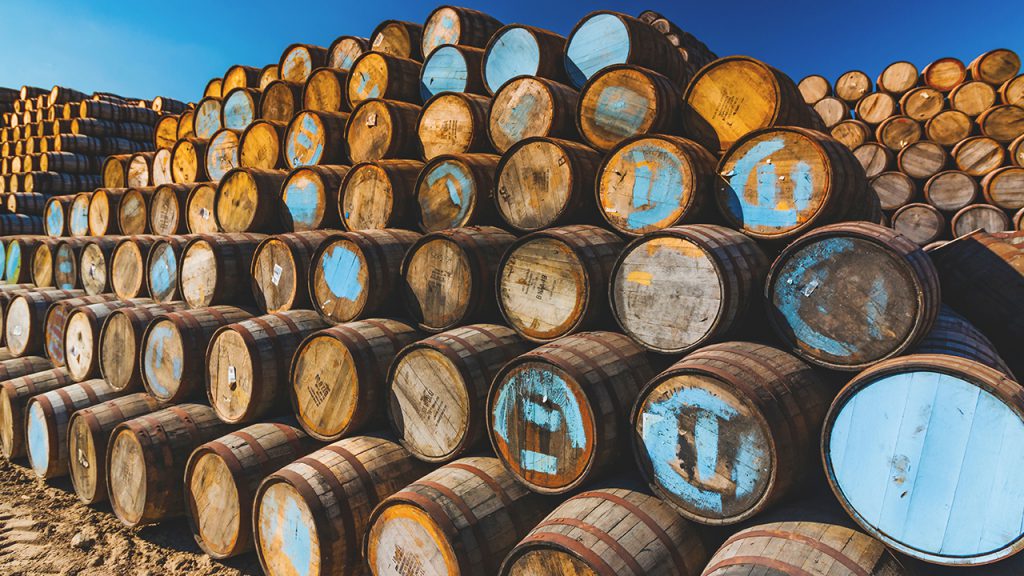 Although most dividends are paid in cash, companies are free to provide their shareholders with any type of dividend they want, including shares of stock or dividends in kind.  Although the people on Wall Street often behave like they are a bunch of drunks, that doesn’t mean they are drinking, or that the companies they have ownership in are giving away free liquor, but we have found three cases where that did happen.  Two of these, by National Distillers Product Corp. and Park and Tilford, have been covered in other blogs.

On October 15, 1933, shareholders of the National Distillers Product Corp. received a warehouse receipt for 24 pints of 16-year-old whiskey for every 5 shares of stock they owned. The whiskey had sat in a warehouse during Prohibition and with the 21st Amendment repealing Prohibition, the company celebrated by distributing their aged whiskey to shareholders. National Distillers stock rocketed up from 19 at the beginning of 1933 to 111.25 in September 1933 and shareholders not only got free whiskey, but benefited from the dramatic increase in the stock price as well. When the United States entered World War II, the government put a prohibition on the production of whiskey and similar liquors so the alcohol could be used for the production of ammunition and synthetic rubber which could no longer be imported from Japanese occupied Asia. In 1943, this prohibition was lifted and two companies rewarded their shareholders with whiskey they had been ageing in their warehouses. In December 1943, Park and Tilford announced that they were providing shareholders with the right to buy six cases of whiskey at a reduced price. Since the country was fighting World War II and all prices were regulated, the government stepped in to spoil the fun. The Office of Price Administration limited the negotiability of the whiskey purchase rights and the maximum profit on the resale of the liquor. Nevertheless, the price of Park and Tilford stock ran up from 57.625 in December 1943 to 98.25 on May 26, 1944. Park and Tilford took advantage of this increase in the price to sell shares to customers of Ira Haupt & Co.  The brokerage unloaded such a large block of shares that the SEC treated the sale as a secondary offering and suspended Ira Haupt & Co.’s membership in the NASD for 20 days for not marketing the shares as such. The third company that distributed whiskey to their shareholders was the Tom Moore Distillery which provided shareholders with 27 original proof gallons of Kentucky bourbon whiskey for each share that they held.

Thomas Selvin Moore was born on March 18, 1853.  His family emigrated from Ireland to begin a new life in Kentucky in the 1840s. Tom began working at John D. Willett’s distillery in 1874 and in 1876 Tom Moore and Ben Mattingly began operating Willett’s distillery on their own and changed its name to the Mattingly and Moore Distillery. The distillery was sold to outside investors in 1881, but Moore stayed on to help operate it. In 1899, Moore struck out on his own and purchased 116 acres of land outside of Bardstown at Morton’s Spring in Kentucky to build his own distillery.  Initially, Moore was able to mash 100 bushels of wheat daily generating 10 barrels of whiskey. The distillery produced “Tom Moore” “Dan’l Boone” and “Silas Jones” whiskeys.  By 1905, the distillery was mashing 300 bushels a day and the warehouses had a capacity of 20,000 barrels. A good wheat bourbon needs to age 12 years or more to reach the right flavor. In 1916, Moore repurchased the distillery he had worked at in Morton’s Spring to expand his production to meet the national demand for his whiskey.
Moore managed his distillery until 1919 when Prohibition was passed and Moore retired.  When Prohibition was repealed in 1933, Moore’s son, Con joined with several partners to reopen and expand the distillery so it could age 50,000 barrels. The company continued to operate the distillery until 1944 when Barton Brands bought the company. The distillery was purchased by Sazerac in 2009, and the distillery was renamed the Barton 1792 Distillery. Tom Moore died in 1937 and in 2007, Tom Moore was voted into the Kentucky Bourbon Hall of Fame. You can still visit the Barton 1792 Brewery in Bardstown, Kentucky, and after the two-hour tour, you can buy souvenirs and get your picture taken in front of the World’s Largest Bourbon Barrel which is over 15 feet tall.  That would be enough bourbon to last me a lifetime!

Whiskey for the War

Few people today realize the impact World War II had on the production of whiskey. During the war, alcohol was needed to make ammunition but more importantly it was needed to make synthetic rubber. The source of natural rubber had been cut off by the Japanese expansion in the South Pacific. The distilleries went on war time Prohibition and were not allowed to make beverage alcohol. They had to produce high proof neutral spirits to produce these two main supplies for the war. Alcohol was used for many other necessary items such as anti-freeze, antiseptic and other medical needs as well.   There was a brief lifting of the Prohibition in 1943 as stocks off alcohol reached a level that allowed for beverage production. Still there were changes made as barrel size was increased to 53 gallons and the hoops on the barrel were reduced in number from eight to six. This was done to save on wood and iron for the war effort. Glass was also saved as the bottle size of 4/5 quart became the recommended size instead of the quart. Grain was rationed to meet the needs of war production but there was no excess for beverage production as excess grain was needed to feed cattle to feed the troops. Consumers saw a shortage of spirits in the market. Aged products were often stretched by blending them with neutral spirits. Whiskey was available but straight whiskey was much more expensive.

Whiskey for the Shareholders

On November 8, 1943, holders of Tom Moore Distillery Co. stock were issued dividend certificates for 27 original proof gallons of Kentucky bourbon whiskey. Originally, the distribution was scheduled for payment on December 1, 1943 to holders of record on November 26, 1943, but an injunction issued in the Detroit Circuit Court restrained the company temporarily from issuing the certificates.  The record date was changed to December 16, and payment was made on December 21, 1943. The company issued dividend certificates which entitled stockholders to obtain barrels of whisky, equal to 53 gallons to the barrel, according to the number of shares they owned. A second certificate was issued for the gallonage not included in the warehouse receipts.  Someone who owned 100 shares of stock received 2700 gallons of whiskey.  This was equivalent about 51 barrels of whiskey. The certificates allowed holders to withdraw from the company’s bonded warehouse in accordance with federal and states laws and regulations. Of course, the government had to intervene, and the Office of Price Administration estimated that the 27 gallons of whiskey were valued at $31.59 or $1.17 per gallon. Those were the days!  Someone who owned 100 shares of stock received whiskey the government valued at $3,159 and shareholders had to pay taxes on that amount. But this gave the shareholders something to complain out when they got drunk. Not only did shareholders receive a whiskey dividend, but the stock price responded as well. In December 1942, the company did a one-for-twenty-five reverse split reducing the number of outstanding shares from 500,000 to 20,000. This means that the company gave away 540,000 gallons, or about 10,000 barrels, of Kentucky bourbon whiskey to its shareholders. The stock price went from $1 to $25 in December 1942 as a result of the reverse split, rose to 50 by September 1943 and peaked at 200 in November 1943 after word of the whiskey dividend was made public. Tom Moore Distillery stock traded only 40 shares on the Baltimore Stock Exchange in September 1943, but the announcement of the whiskey dividend led to a flourish in trading.  19,760 shares, virtually the entire float of the company, changed hands in November 1943 and 10,880 shares exchanged hands in December 1943. In December 31, 1943 after the dividend had been paid, the price of the stock sank to $75. In 1944, Barton Brands bought the Tom Moore Distillery at $75 a share at a total cost of $1,500,000.  I’m sure that many of the shareholders celebrated the sale by drinking some of the Tom Moore bourbon whiskey the company had given them in 1943.