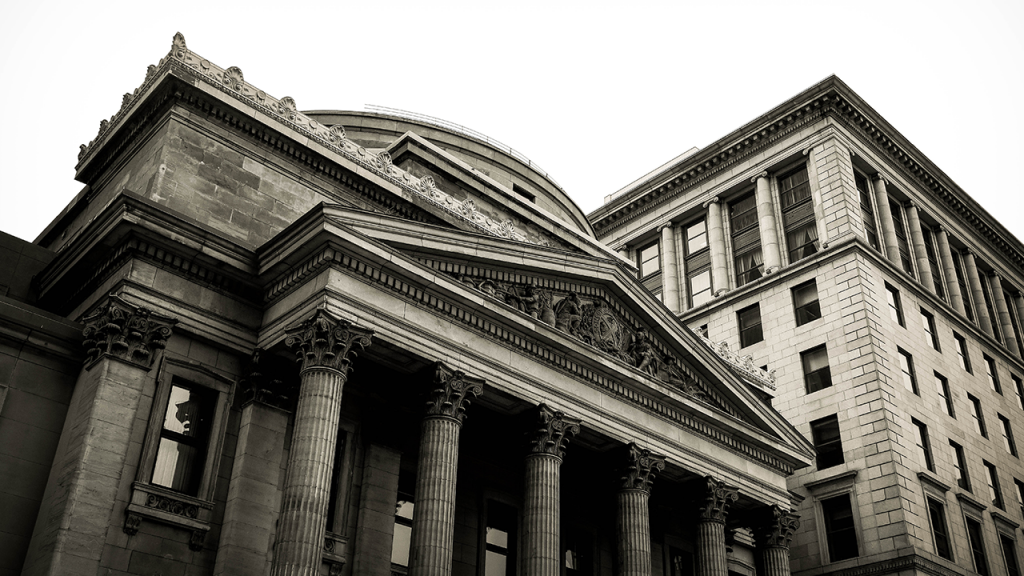 A previous blogged discussed the founding and dissolution of the First Bank of the United States (BUS) which existed from 1791 to 1811. After the First BUS recharter was defeated, the United States suffered defeat in the War of 1812, and suffered from a lack of fiscal order and an unregulated currency. As industrial and commercial interests expanded after the War of 1812, politicians advocated for the creation of a second Bank of the United States to promote the economy. After the war, there was sufficient support to overcome the opposition to the first BUS. Opponents of a second BUS had seen its charter as not only a threat to the Jeffersonian agrarianism and state sovereignty, but to slavery since, as John Taylor of South Carolina put it, “if Congress could incorporate a bank, it might emancipate a slave.” The bank’s constitutionality had been established in 1819 in McCulloch v. Maryland, a landmark decision in constitutional history, but many still felt the establishment of a bank by the Federal government was unconstitutional. The Bank of the United States would be a depository for collected taxes, make short-term loans to the government, and could serve as a holding site for incoming and outgoing money. The main goal of the bank would to promote commercial and private interests by making sound loans to the private sector. The second BUS charter was signed into law on April 10, 1816 by President Madison. The second BUS was modeled on the first with the government owning 20% of the $35 million in equity, divided into 350,000 shares of $100 each. The bank had 4000 investors of which 1000 were Europeans, though the bulk of the shares were owned by a few hundred wealthy Americans. The second BUS had 25 branch offices in addition to its main office in Philadelphia. After the BUS was established, southern and western branches issued credit to fund expansion. This led to a financial bubble that burst in the Panic of 1819 leading to sharp declines in property prices, much as happened in 2008 when the most recent bank-induced bubble led to a financial crash. The public was unhappy about the prolonged recession that resulted from the BUS-induced Panic of 1819. Nicholas Biddle took over the BUS in 1823, and switched to a sound money policy. At that point in time, state-chartered banks could issue their own currency, but when their currency was deposited at the BUS, the bank would demand gold or silver from the issuing bank, thus controlling and limiting the issuance of currency by state banks. Because the number of banks in the United States grew from 31 in 1801 to 788 in 1837, state-chartered banks began to oppose the BUS because it limited their ability to issue currency and make profits. Shares in the Second Bank of the United States were the most liquid and most secure of all shares listed on US exchanges. The bank paid steady dividends to its shareholders, increasing the dividend from $5 in 1819 to $7 by 1834. Since the US government succeeded in paying off all of its outstanding bonds by 1835, the stock of the Bank of the United States was not only the largest issue on the stock exchange, but it was also the safest since it was backed by the United States Government, or so it seemed.

Andrew Jackson had received the largest number of votes, the largest number of electoral votes and carried the most states in 1824, but failed to gain a majority. The House of Representatives elected John Quincy Adams as President instead. When Jackson was elected in 1828, he felt rancor toward his opponents for keeping him from being chosen President in 1824. Jackson was a populist, and even though the Bank was popular because the economy was growing as a result of its sound-money policies, Jackson opposed the BUS as unconstitutional, corrupt and a danger to American liberties. In Jackson’s mind, the BUS was at the center of the class warfare of the 1830s which pitted “farmers, mechanics and laborers” against the “rich and powerful,” in words that seem reminiscent of Occupy Wall Street’s opposition to the 1%.

Jackson’s opposition to the BUS led to the “Bank War” between Jackson and Biddle over the rechartering of the Second BUS. The recharter of the Second BUS became the focal point of the 1832 election. Pro-bank forces tried to get a vote on the charter prior to the 1832 election to discourage a Presidential veto, but anti-bank forces delayed the vote until after the election when Jackson vetoed the recharter, and which Congress failed to override.

One of Jackson’s first actions after re-election was to remove all government deposits from the Bank of the United States and spread them out among state-chartered banks, crippling the second BUS. Biddle counterattacked by contracting bank credit, but this led to a financial downturn which only added to opposition against the BUS. Business leaders in American financial centers became convinced that Biddle’s war on Jackson was more destructive than Jackson’s war on the Bank. When the Second BUS’s charter expired in 1836, the bank rechartered as a Pennsylvania private corporation. In 1839, the bank suspended payments, and it went into liquidation in 1841. As was true of the first BUS, the bank was born of politics and died of politics. Andrew Jackson won the bank war, and the BUS charter lapsed in 1836. At one point during the Bank War, Jackson had offered to charter a new bank if it were publically owned, and it did not compete with state-chartered banks by issuing commercial loans. Although Jackson’s version of a Central Bank never came into existence, when the Federal Reserve was chartered in 1913, Jackson had his way at last because the Federal Reserve is 100% owned by the government, does not compete with commercial banks, and to avoid the political battles over rechartering, the charter for the Federal Reserve is perpetual.

Today the battles are over who is appointed Federal Reserve chairperson, not over whether the Federal Reserve should be rechartered. The advocates of hard money and soft money continue to battle over interest rates, quantitative easing, the Federal deficit, funding the government and the other subjects related to the availability of credit. The Bank War was not just part of the 1832 Presidential election, but it is part of every election and almost every battle involving the economy today, and in the future.