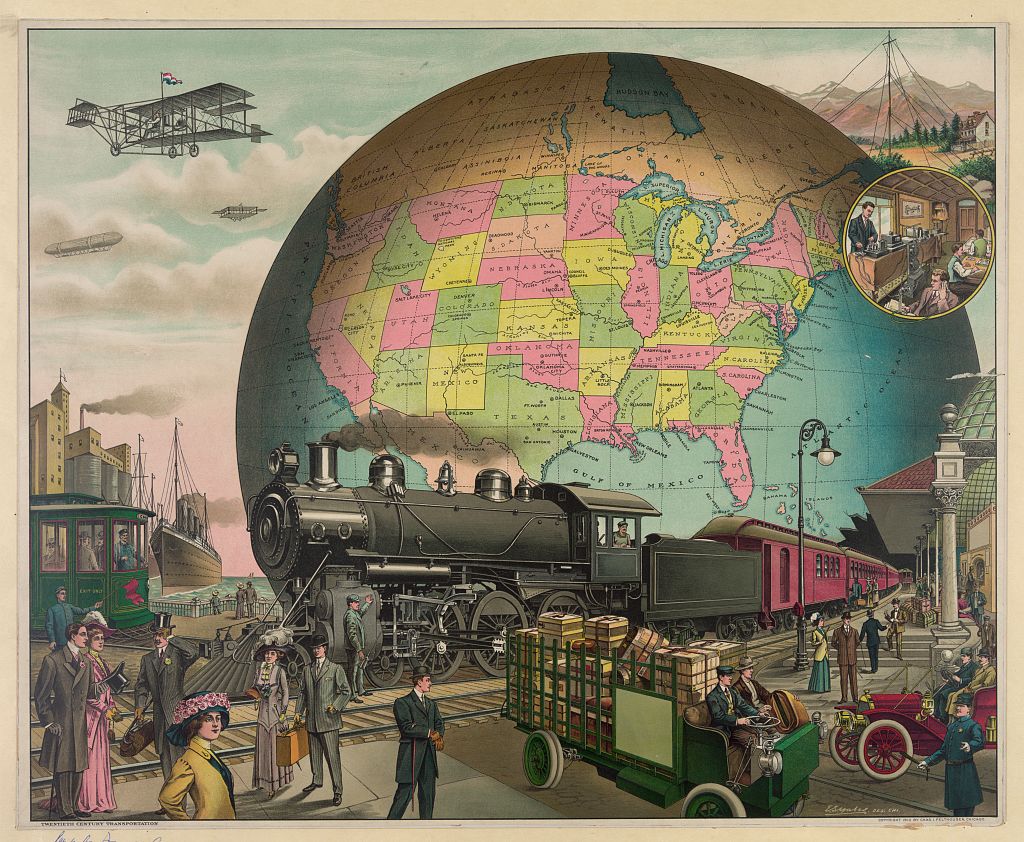 Today there are only two stock exchanges in the United States, the New York Stock Exchange (NYSE) and the NASDAQ.  The NYSE Amex LLC is owned by the NYSE.  This wasn’t the case 225 years ago or 100 years.  There have been dozens of exchanges that have existed in the United States over the past 200 years. Unfortunately, very few investors are aware that regional stock exchanges played an important role in financial markets until World War II.  Over time, thousands of stocks were listed on the regional exchanges that were not listed on the New York Stock Exchange, NASDAQ or AMEX, these stocks have been overlooked because until now data on those stocks was unavailable.  Any stock market analysis that explores the beginning of the US Stock Market in 1786 until the present must include data from the regional exchanges.  It wasn’t until the growth of the railroads and the introduction of the telegraph in the 1840s that the NYSE began to dominate national stock markets.  Global Financial Data has collected data from all of the major regional exchanges and has put together indices of the regional exchanges so their performance can be analyzed over time.

Richard E. Sylla, Jack Wilson and Richard E. Wright collected data on U.S. regional exchanges between 1786 and 1862 and made the data available in “The Price Quotations in Early U.S. Securities Markets, 1790 to 1860.” They collected data for stock markets in Alexandria, Baltimore, Boston, Charleston, New Orleans, New York, Norfolk, Philadelphia and Richmond.   We have taken this data and incorporated it into the Global Financial Database.  However, this leaves the question, what happened in the United States after Sylla, Wilson and Wright’s database ended?  Data is available from Sylla, Wilson and Wright for Philadelphia through 1850, New York through 1853, Boston through 1859 and Baltimore through 1862.

There are other sources for data that allow us to extend these data sources after 1850. The Commercial and Financial Chronicle began publishing in July 1865 so it can be used to provide data from 1865 until 1972.  For stocks that traded between 1850 and 1865, we collected data from local newspapers to fill in the gap between 1850 and 1865.

We took the data in the Sylla database in order to determine the number of stocks in different sectors and how this evolved over time.  The four primary stock markets were in Boston, New York, Philadelphia and Baltimore.  The stock markets in Alexandria, Charleston, New Orleans, Norfolk and Richmond were small and traded few stocks.

As Figure 1 shows, railroads became the dominant sector in the United States in the 1830s.  The growth of railroads favored deep capital markets such as New York over local capital markets such as Boston, Philadelphia or Baltimore. The introduction of the telegraph in the 1840s enabled capital markets to centralize even more since investors no longer had to be in Boston, New York or Philadelphia to buy and sell stocks. Investors could wire their orders to brokers in New York and receive a wire back.  In 1866, the transatlantic cable was laid and London was connected to New York by cable for the first time.  It no longer took a week to send information from London to New York, but minutes. 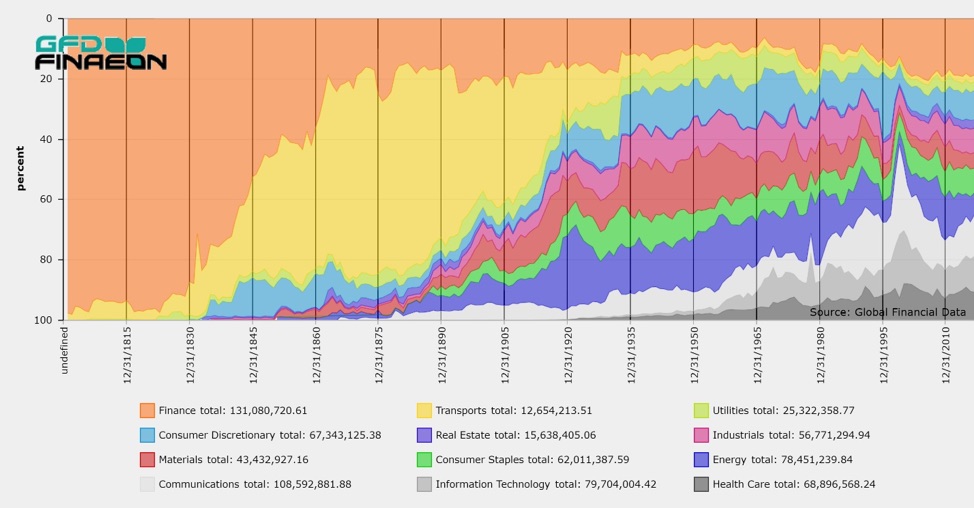 Although the New York Stock Exchange was the largest exchange by market cap, the Boston Stock Exchange, founded in 1834, had more companies listed on its exchange.  In addition to the bank and insurance stocks that were listed in Boston, there were a large number of railroads, Michigan mining stocks, and local manufacturing stocks that operated in Massachusetts; however, none of these companies had a national reach.

Before the Civil War, there were two Panics in 1837 and 1857 that drove the American economy into a depression.  Each of the regional stock markets was affected by these Panics, but to different degrees because financial markets were not as integrated before the war.  When Panics hit in 1869, 1873, 1884, 1893, 1901 and 1907, they were all centered in New York City which had become the financial center of the United- States.

By the start of the Civil War, Wall Street was clearly the financial center of the United States.  Exchanges in Boston, Philadelphia and Baltimore might provide markets for local companies, but any corporation that was of sufficient size to operate across state lines listed on Wall Street. Competition with the New York Stock Exchange would no longer come from regional exchanges in Boston, Philadelphia or Baltimore, but from new exchanges located in New York City that competed directly with the NYSE.

The Open Board began operating in 1863 and offered access to anyone who paid the membership fee.  Instead of relying upon twice-daily auctions as the NYSE did, it provided continuous trading.  The NYSE carried out two auctions each day, so providing trading throughout the day was an innovation that gave the Open Board an advantage over the NYSE. In addition to the Open Board, the Gold Exchange allowed investors to speculate on the price of gold relative to the paper money the Union was using to fund the Civil War. In 1869 both the Open Board and the Gold Exchange merged with the New York Stock Exchange to form a single exchange.  If you can’t beat them, absorb them.

The growing importance of the curb became obvious in 1907 when the two primary stocks that drove the “Rich Man’s Panic” of 1907, United Copper and Knickerbocker Trust were both traded on the curb, not on the NYSE.  Wall Street, and in particular, the “money trust” was blamed for the Panic of 1907. Critics alleged that J.P. Morgan and the banks ran the financial markets for their own benefit, not that of the public.  The House Committee on Banking and Currency, also known as the Pujo Committee, investigated the causes of the Panic of 1907.  The curbstone brokers used the threat of the NYSE’s monopoly control over the financial markets to organize and establish the New York Curb in 1921.

Meanwhile, new regional stock exchanges were being founded throughout the country.  Whenever there was a gold strike, a local exchange would be founded to raise capital for mines and to trade mining stocks.  The exchange would close after the gold rush was over with, but over time new exchanges were established in the larger cities of the United States.   Regional stock exchanges were opened in Pittsburgh (1864), New Orleans (1880), Chicago, (1882), San Francisco (1882), Washington (1884), Cincinnati (1885), Cleveland (1899), Los Angeles (1899), St. Louis (1899) and Detroit (1907). Of these exchanges, the Chicago Stock Exchange became the largest.  Table 2 illustrates the rise and fall of the regional exchanges between 1880 and 1940.

In addition to listing local stocks, regional exchanges also listed stocks that were traded on either the NYSE or the Curb.  Although hundreds of stocks might trade on a regional exchange, if a regional corporation grew in size, it would move to the NYSE or the Curb to take advantage of the capital that was available through those two exchanges.  In addition to local banks, utilities and trams, the stocks that listed on a regional exchange reflected the industry that grew up near the city.  Detroit listed automobile stocks, Los Angeles listed oil stocks, San Francisco listed mining stocks, and so forth.

In the 1920s, you could divide the market for stocks in the United States into four categories: the New York Stock Exchange, the Curb, regional exchanges and over-the-counter stocks.  Stocks were mutually exclusive between the NYSE and the Curb.  Once a stock listed on the NYSE, it no longer traded on the Curb.  Stocks could dually list on the regional exchanges and either the NYSE or Curb.  Stocks that did not list on either the NYSE, the Curb or a regional exchange, such as banks and insurance companies, as well as small industrial companies, listed over-the-counter.

After World War II, the regional exchanges began to merge.  In 1949, the Philadelphia and Baltimore exchanges merged and the Chicago, Cleveland and St. Louis exchanges merged to form the Midwest Stock Exchange.  In 1953, the San Francisco and Los Angeles Stock Exchanges merged to form the Pacific Stock Exchange.  By the time the NASDAQ was formed in 1971, providing a nationwide computer network for buying and selling stocks, regional exchanges had become obsolete.  The few that remained merged into other exchanges.  NASDAQ also sounded the death knell of the AMEX.  Companies that once listed on the AMEX until they were able to meet the listing requirements of the NYSE now listed on the NASDAQ.  Some NASDAQ stocks never moved to the NYSE and in 2006, NASDAQ registered as a national securities exchange.  In 2008, the AMEX was acquired by the NYSE. Today, the NYSE and NASDAQ are the two largest stock exchanges in the world.

Studying the Past to Understand the Future