Mexico has been struggling to develop its economy since Spain invaded Mexico in 1521 and it gained its independence in 1821.  When Mexico was a colony, Spain relied upon exports of silver to profit from its control over the economy.  The economy stagnated after Mexico gained its independence, but General Porfirio Diaz (1876-1910) attempted to develop the economy by allowing foreigners to invest in Mexico and build railroads and mines with foreign capital.  Most of the investment in the 1910s and 1920s was spent developing Mexico’s oil, but after the nationalization of the oil industry in 1938, foreign capital stopped flowing into Mexico and the country had to rely on domestic capital.  The economy grew rapidly after World War II, but collapsed in the 1980s.  Since NAFTA was signed in 1994, Mexico has pursued market-oriented policies to expand trade with the rest of the world. The period between 1982 and 2007 was an era of high returns to both stocks and bonds, the highest in the country’s history, but during the past 12 years, returns have stagnated. Global Financial Data has 195 years of data on Mexico stretching from 1824 until 2019.  GFD has data on 44 companies that listed in London and 30 companies that listed in New York between 1824 and 1989.  Most of the companies that listed in London were mining companies, railroads, banks or oil and gas companies.  Oil and gas, telephone and telegraph, utilities and mining companies listed in New York. Some of the companies had a long existence with the Anglo-Mexican Mint Co., Mexican Eagle Oil Co., Mexican Railway Co., and United Mexican Mine Co. all lasting over 50 years before meeting their demise. The poor performance of equities was matched by the poor performance of government bonds. Mexico was in default during most of the 1800s, paid interest from 1887 until World War I, went into default during the Mexican Revolution, then returned to solvency after World War II.  Mexico defaulted on its bonds in 1827, made a few interest payments in the 1860s, but didn’t really start paying interest regularly until 1887.  Mexico defaulted a second time in 1914 and remained in default until 1963 when the country issued new government bonds in New York.  Mexico defaulted a third time in 1982 and remained in default until the “Brady plan” restructured Mexico’s debt in 1989. The Mexican government has been in default on its bonds in more years than it has paid interest.  Mexican government bonds are definitely not risk-free. Even with the reinvestment of interest received periodically between 1824 and 1972, investors would have just broken even on Mexican government bonds during those 150 years.  On the other hand, between 1994 and 2018, investors in Mexican bonds received an 8.73% annual return, which exceeded the 8.16% returned to equities during those years. British investment in Mexico began in 1824 when the Anglo-Mexican Mining Association, the United Mexican Mine Co. and the Mexican Mining Co. were established.  These three companies were followed by The Company of Adventurers in the Mines of Bolaños, the Tlalpujahua Mining Co. and the Real del Monte Silver Mine Co. in 1825 and finally the Anglo-Mexican Mint in 1829.  After an initial bubble in Mexican shares in 1825, shares lost over 90% of their value, reaching their nadir in 1876 as is illustrated in Figure 1. 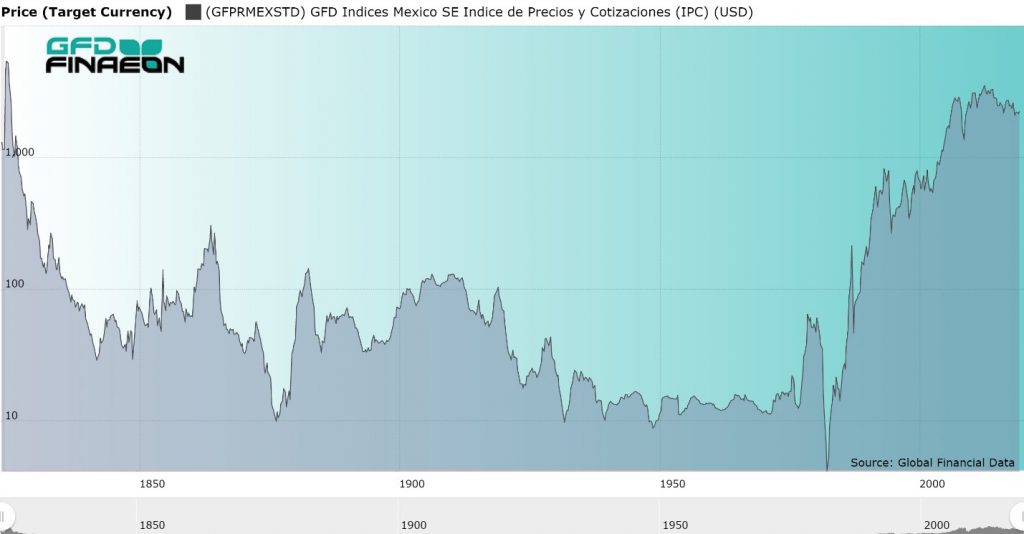 However, in 1876 General Porfirio Diaz became the leader of Mexico and allowed foreigners to invest in Mexico and build railways across the country.  The Mexican Railway Co. was established in 1864, the Mexican Telegraph Co. in 1881, the Mexican National Railroad Co. in 1882 and the National Bank of Mexico in 1886.  These companies rose in price, providing investors with a ten-fold return between 1876 and 1883. The Bolsa Mexicana de Valores was founded on October 31, 1894. During the 1910s and 1920s, foreign capital flowed from the United States into oil and gas companies. The Compañia Mexicana de Petroleo "El Aguila" S.A. (Mexican Eagle Oil Co. Ltd.) was one of the hottest stocks in both New York and London during the 1910s and 1920s (Figure 2).  Speculators loved to trade the “Eagle” as it bounced up and down in the 1920s.  However, the Constitution of 1917 gave the Mexican government control over its resources and in 1938, the oil industry was nationalized by the government and Petroleos Mexicano (PEMEX) was born. 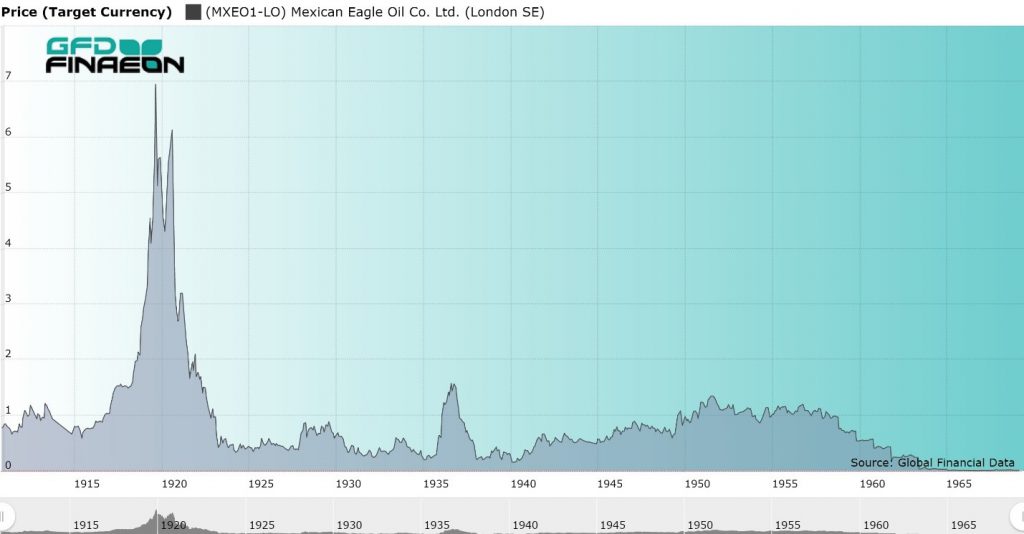 Although this gave Mexico possession of its oil industry, further investment of foreign capital in Mexico came to a halt.  Mexico had to rely upon domestic investment and the stock market began a steady decline for the next 50 years.  This occurred despite steady growth in Mexico between 1940 and 1970.  The Nacional Financiera introduced an index of Mexican stocks in 1930.  The index included 11 stocks in 1958 and expanded to 30 stocks in 1966 when daily calculations began. The Indice de Precios y Cotizaciones (IPC) was introduced in 1978 and includes 35 stocks.  It is currently calculated by S&P. The Mexican stock market crashed during the Peso Crisis of 1982, losing two-thirds of its value in Pesos, and over 90% of its value in U.S. Dollars.  Over the next twenty years, the market bounced back, rising over 98% per annum between 1982 and 1994 when NAFTA was signed. Stocks stagnated between 1995 and 1999, rose to 2006, but have stagnated since then. The return to equities in Mexico, as measured in US Dollars, is provided in Table 1.  As can be seen, over the long term, investors have not been richly rewarded.  Between 1824 and 1981, investors on average lost 4% per annum.  All of the return to stocks has occurred since 1982 when the stock market bottomed out during the Peso Crisis.  Unfortunately, only data on the price behavior of stocks is available for Mexico. Complete data on the return to stocks and bonds is not available because the dividend record for stocks is incomplete and the record on bond yields and returns is unavailable in the 1970s and 1980s.  Nevertheless, we can provide data on stock prices over the past 195 years.

Mexican stocks and bonds provided horrible returns to shareholders between 1824 and 1981.  Investors in both Mexican equities and Mexican government bonds lost money, even after the reinvestment of dividends and interest. Only since the collapse of the Peso in 1982 have investors been able to obtain positive returns.  However, equity investors have broken even since 2007 as have investors in government bonds. Investors had 25 years of marvelous returns between 1982 and 2007, but returns have stagnated over the past dozen years. Distrust of the Mexican establishment led to the election of Andres Manuel Lopez Obrador in 2018.  How his policies will impact the stock market in the future remains to be seen.  Although the fabulous returns of the 25 years of Mexico’s investment miracle are unlikely to return, one can hope that Mexico does not return to the stagnation it suffered in the 60 years before 1982.