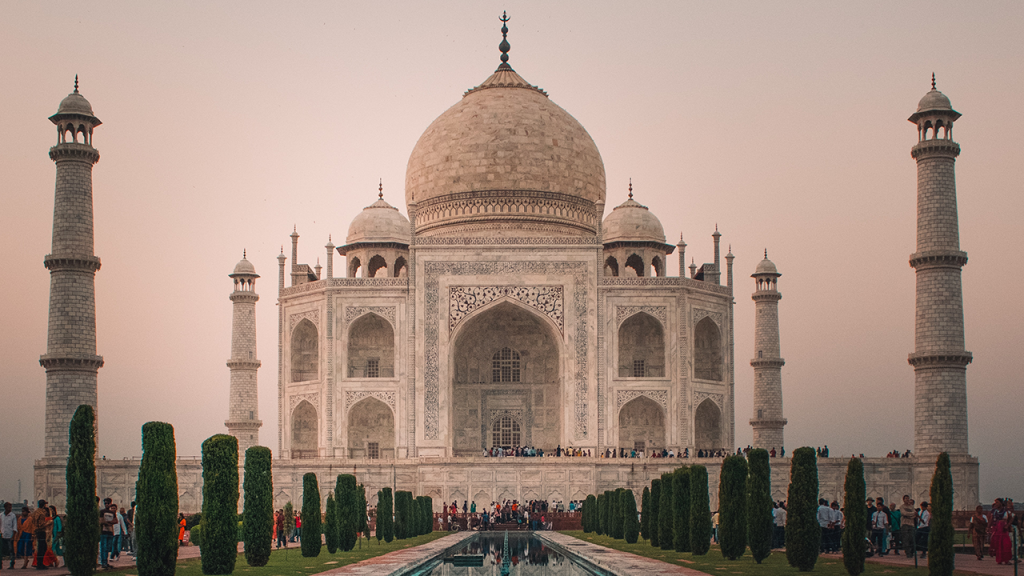 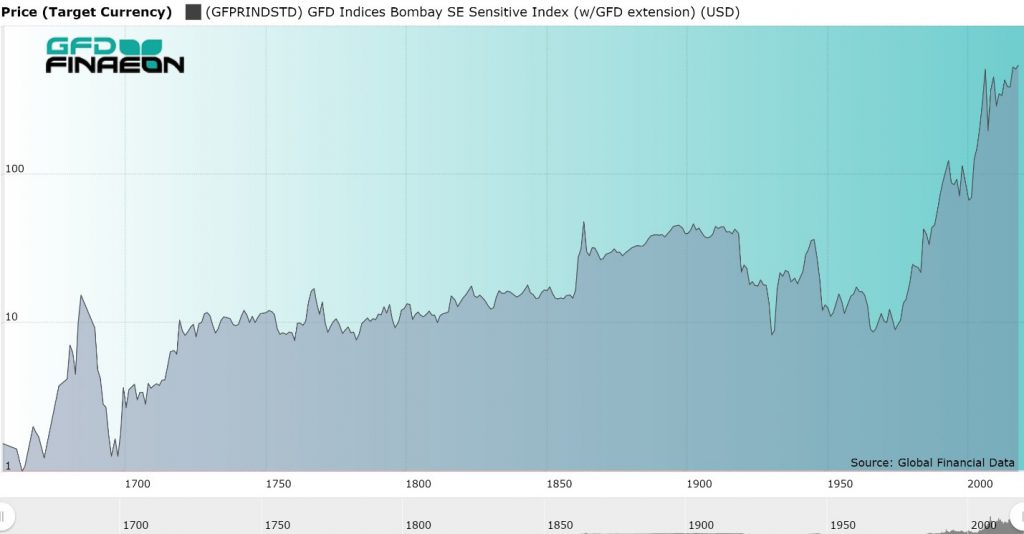 The performance of stocks in India over the past 350 years is illustrated in Figure 1.  The most interesting observation here is the lack of movement in the index from the 1700s to 1980.  All of the return to shareholders came in the form of dividends.  This is the legacy of the guaranteed returns that first went to shareholders of East India Co. stock between 1792 and 1874, and to the railroads up until the 1890s.  After the government gained control over the railways in the 1880s, investment went into tea, rubber, cotton, mining and other resources, not into industries that could develop the country.  The ratio of the stock market’s capitalization to GDP shrank between 1880 and 1980 and investors had to rely upon dividends to obtain a return. Figure 2 shows the behavior of Indian stocks since the domestic index was first computed in 1920. As can be seen, there was virtually no change in the price of Indian stocks from 1920 until 1980.  The Indian economy went through an economic boom between 1910 and 1930 and an economic bust between 1930 and 1950. After India became an independent country, the economy went through a period of economic boom driven by Five-Year plans and socialist policies leading to average growth in the economy of 3.1 percent per year.  However, growth slowed between 1970 and 1990 leading to a period of economic liberalization which has prevailed in India since P.V. Narasimha Rao and Manmohan Singh introduced these reforms in 1991.  This has given investors the opportunity to finally benefit from growth in the Indian economy.  Today, there is investment in information technology as India tries to provide growth to over 1.3 billion people. 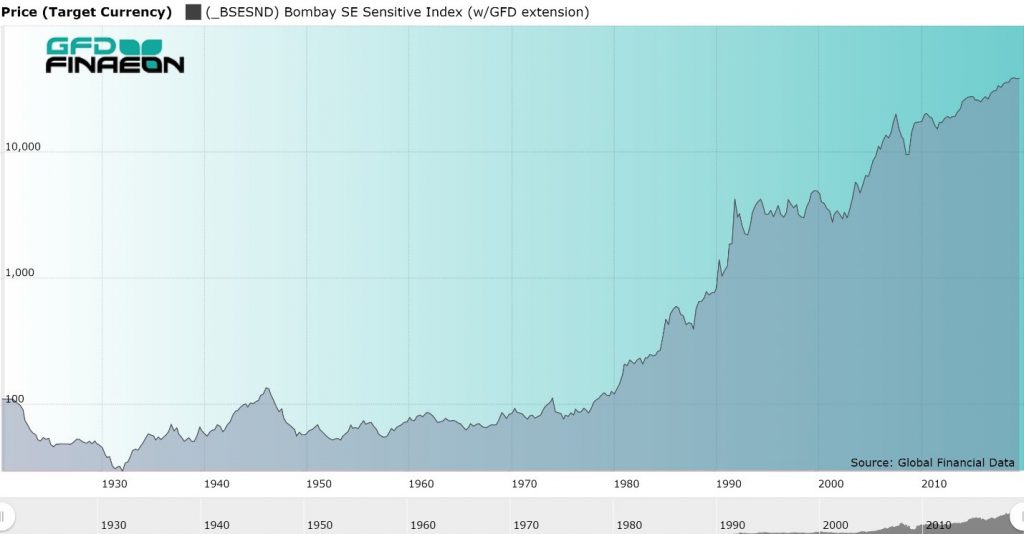 On the other hand, since India was a British colony, there was little risk of default on its outstanding bonds.  Figure 3 provides a graph of the yield on Indian government bonds from 1722 until 2019. The series uses the yield on East India Co. stock from 1722 until 1864 when the Government of India issued its first bonds.  The dividend was set at 10.5% in 1793 and remained at that level until the dissolution of the company in 1874. India issued a 4% bond in 1864 which was later replaced by bonds yielding 3.5% then 3%.  Unlike many other emerging markets, India has never defaulted on its bonds, a fact that is reflected in the yield remaining around 4% until India’s independence.  The yield rose to 14% in 1995 because of inflation, but has declined since then. 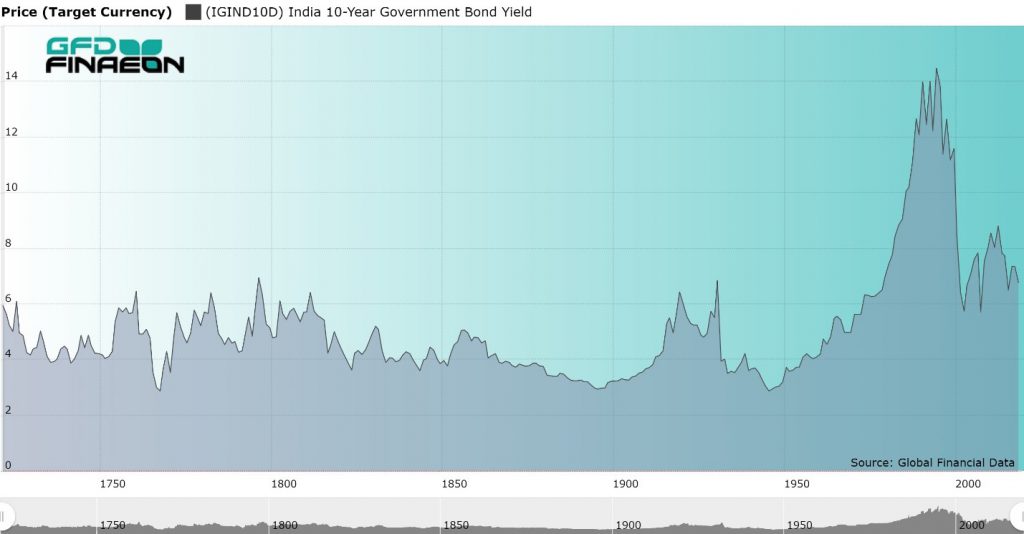 The actual numbers that measure the return to stocks and bonds in India is provided in Table 1.  As can be seen, there was virtually no change in the price of Indian stocks between 1720 and 1980.  The combination of a fixed dividend on East India Co. stock, guaranteed returns on Indian railroads, the deindustrialization of India and the focus on small, resource-based industries limited the opportunity for capital gains in India.  Investors relied upon dividends as their source of income.  During the past 200 years, Indian stocks have only provided a 4.16% annual return, barely 1% greater than bonds.

Mughal India was one of the most advanced areas of the global economy in the 1700s, exporting textiles and spices to Europe and the rest of the world.  Under the British East India Co. and the British Raj, Britain developed India’s infrastructure, but it did not develop the economy.  While the United States, Canada and Australia enjoyed dramatic increases in their GDP and investors received high rates of return, India stagnated.  It has only been during the period of Globalization since 1981 that growth has returned to the country.  India will soon have the largest population of any country in the world, but it may be several decades before India has the largest economy in the world.